How Can We Get Customers Back in Brick and Mortar Stores?

It’s the end of January and I haven’t shopped since mid-December, what’s wrong with me?

It’s only when I stopped to read the retailer Christmas reviews a couple of weeks ago that I realised this, and I was actually quite shocked.

As a teenager, I looked forward to the tradition of a day out to the local indoor shopping centre on the day after Boxing Day with my sister and £30, made up from gifted fivers. I was ready to splurge. We’d lunch at McDonald’s and finish with a cake in the BHS café and it was genuinely one of the best days of my year. Ok a bit sad, but still…

Although the tradition with my family stopped, my love for shopping continued, my tastes became more sophisticated, but nonetheless, I was border-line a shopaholic, until, well, recently. Why is that? I earn a good wage, my only debt is my mortgage and I have no kids!

It got me thinking.

Debenhams reported a drop in sales of 5.7% on the 18 weeks leading up to the 5th January. The Mecca of “I definitely need that” and more recently “at that price I’ll get one for mum too,” but the news wasn’t really unexpected and typical of other well-known retailers’; New look, Next, Moss Brothers, Card Factory, with the biggest loser Mothercare, falling by 11.4%. Yet, conversely, Primark saw growth of 4% on revenue in the same period. Winners this year also included Hobbycraft, Dunelm and Footasylum. 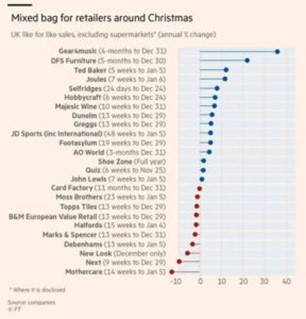 Similarly, in grocery, it was a polarising result. Aldi and Lidl reported sales were up 10% and 8% respectively on last Christmas, with almost triple the growth than the mid-market giants of Tesco and Morrison’s. Likewise, high street favourites Marks and Spencer’s had a decrease of 2.2%

This Christmas my shopping was done mainly online, a lot via Amazon and notonthehighstreet but independents too. I bought a couple of unusual bits at my local gift shop, stocking-fillers from the office charity gift shop, and two multi-buy purchases from new online shops set up by friends. It sounds more complicated than it was, it was easy, far less stressful than tackling shopping-centre-hell and far more enjoyable to be surprised by what was out there, for me, as much as I hoped was the case for those I was buying for.

I thought about these three themes some more.

We’re more impatient than ever. Our lives are more complex. We’re more conscious of our purchases. We multitask to desperately claw back minutes, yet still feel guilt at the amount of quality time we spend with the people we care about. I’m sure a lot of you will share my view that I just simply don’t have the time, or the will, or even a glimpse of the excitement to commute into town, pre- decide how long I want to pay to park, only to joylessly trudge around picking up generic 3 for 2’s, in order to tick them off my list. Likewise, with the food shop, minus the parking dilemmas.

Unfortunately, e-commerce is not going to save the shopping I’ve loved. According to a House of Commons Briefing paper, from October 2018 on the Retail sector in the UK:

‘In the year to August 2018, 28 retail companies with multiple stores have ceased trading, affecting 2,085 stores and 39,000 jobs according to the Centre for Retail Research (note that this should not be interpreted to mean that these many jobs have been lost). The Local Data Company found that 11.2% of retail premises were vacant in the second half of 2017, up from 11.0% in the first half of 2017. This is the first time that the ‘vacancy rate’ has risen since the Local Data Company began collecting this data in 2012.’

Although we’re largely aware of this, the Christmas results showed a story of two halves. Despite falls for M&S, Mothercare and Sports Direct, Selfridges were up 8% on the 24 days in the run-up to Christmas, as was John Lewis who also reported an 4.5% increase YOY.

So how can we get people back to the British high street and enjoying shopping again? What is it about the retail winners?

A clear theme was emerging. This Christmas, and more generally, the winners all have something in common. It’s not their price point, it’s not their approach to discounting or their localities. It’s not the size of their store or their parking facilities. It’s something else. Perhaps it’s the same anticipation of going into the store to explore, as it is waiting for the John Lewis Christmas brand ad to air?

It’s the joy of the surprise!

When all we remember is a product push message telling us what we can buy and how much it is, we’re not inspired. We can just log on. It’s a box tick.

What we look for in a shopping experience above a good price appears to be the need for a value exchange that compensates us for the feeling that consumption is just a job, especially when it comes to Christmas. I don’t know what I’m in for when I enter the middle-aisle at Lidl and Aldi. I enjoy the experience at Selfridges and John Lewis, it feels more magical. I also like the occasional rummage at Primark, Hobbycraft or Dunelm because I’ll often pick up something unexpected.

2019 festive planning has already started for retailers, for some, it’s close to being finalised. Maybe this year give us a reason to feel excited again! So, retail brands everywhere, I ask you to look to this year’s winners. Question your buying, merchandising and marketing teams, “Where’s the surprise? Not just for the end-user, for the shopper too?”  Because if you’re not and after another business-not-so-usual year ahead, I fear for the truth in Sports Direct leader Mike Ashley’s prediction that the high street is at risk of being “smashed to pieces.” And I don’t want to write about that next January.

Previous
Back to top
Next